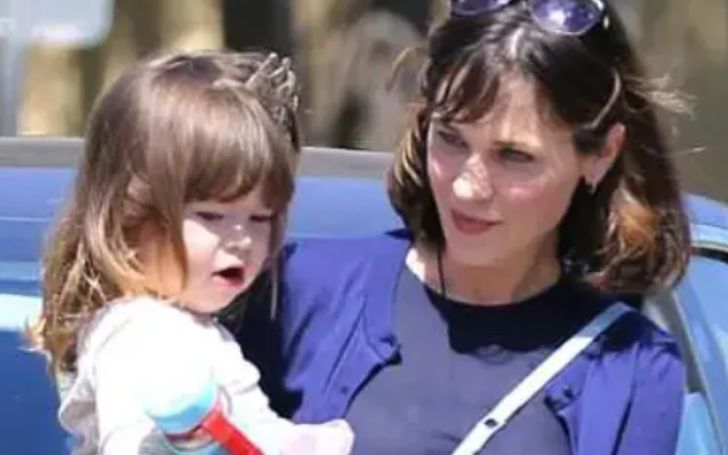 Elsie Otter Pechenik, the Texas-born star-kid, is the daughter of Zooey Deschanel. The New Girl star, Deschanel in her marriage with ex-husband and American film producer, Jacob Pechenik, gave birth to Elsie in 2015. She is 7 years old as of 2022.

From the beginning, Elsie’s parents have kept her protected from the chaos of social media. This has just made us curious to know more about this adorable little girl. So who is Elsie Otter Pechenik? Does her name have a special meaning? We will find out soon.

Here, in this article, we will learn more about the life of 7-year-old Elsie, her parent’s divorce, Deschanel’s current relationship, and much more! And was her first word actually “cheese”? Let’s find out together!

Elsie Otter Pechenik Was Born Right After Her Parents’ Wedding

Elsie was born soon after the wedding of her parents, Zooey Deschanel, and film producer, Jacob Pechenik. She was born on 18th July 2015 in Austin, Texas. Her parents, Zooey and Pechenik had married just a month earlier in June 2015 after getting engaged in Jan the same year.

The ex-couple announced Elsie’s arrival and their marriage to the people in August – a month after her birth.

Elsie is the oldest daughter of actress/musician, Deschanel, and Jacob. Along with Elsie, Deschanel and Pechenik also have a son, Charlie Wolf Pechenik, who is two years younger than his sister. He was born in May 2017.

Indeed, Deschanel has named her daughter the most unique name possible. She also only revealed the name three months after her daughter’s birth. Moreover, this announcement left the audience in awe!

The name, “Elsie” fascinated both of her parents. They absolutely loved it. Apart from this, her middle name, “Otter”, comes from their love for this intelligent yet sweet creature. Deschanel loves otters.  When asked about the meaning of her daughter’s name, she addressed how otters are cute animals who do cute things like holding hands when sleeping.

We only hope that Elsie also grows to adore this creature she is named after.

Her First Word Was “Cheese”

According to her mother, Elsie started speaking with the most hilarious first word. In a 2016 interview with Jimmy Kimmel, Zooey Deschanel stated that her daughter’s first word was “cheese.” This left her totally LAUGHING OUT LOUD!  This apparently had something to do with her daughter’s father, Pechenik.

In addition, Elsie later picked on words like “bubble” and “mom” later in life.

It has been reported that Elsie’s parents, Zooey Deschanel and Jacob Pechenik met on the set of Bill Murray’s movie, Rock the Kasbah, in 2015. Following their first meeting, the couple officially announced their engagement in January 2015 and married in the same month. Shortly after, Elsie was born.

However, they divorced each other after four years of togetherness. In October 2019, they filed for a divorce which was then finalized on 1st June 2020. A representative for the couple reported that the couple was better off as friends, co-parents, and business partners, rather than life partners.

Today, Deschanel and Pechenik share custody of their two children including Elsie. Furthermore, Elsie’s mother has already moved on from the separation and occasionally meets the father of her daughters. Also they apparently all live in California.

Jacob Pechenik isn’t Zooey Deschanel’s first husband. From 2009-2012, she was married to Ben Gibbard, a singer. She started dating Pechenik three years after her divorce from Gibberd in December 2012.

How is Elsie’s relationship with her Mother’s Current Boyfriend?

Deschanel is currently in a loving relationship with the Property Brother star, Jonathan Scott. This relationship began shortly after she split up from the father of her children in August 2019.

This lovely couple met in the show, Carpool Karaoke, and are together since.

Undoubtedly, Scott loves both of Deschanel’s children to bits. He even has a good relationship with her ex-husband. This has been reflected in one of the posts on Zooey Deschanel’s Instagram.

Here, we can see Scott holding Elsie on his shoulders, while Pechenik holds his son. Zooey posts this recently in June, with the caption,

“So thankful my kids have these two awesome guys in their lives.”

What a big, lovely family!

Elsie Is Already An Environmentalist And A Fashionista

Jonathan Scott, Deschanel’s current boyfriend, reports that Elsie is already very concerned for the environment. In fact, she once wrote a letter to the senator stating her concerns about environmental waste.

Scott in an interview stated that this was the “sweetest thing” he’d ever noticed.

One other thing that is intriguing about her is the little girl apparently also has some sense of fashion. Her mother once said that Elsie’s fashion sense is improving as she is growing up.

Reportedly, at such a young age Deschanel’s first child already picks her own clothes and puts outfits together. Is she following her mother’s fashion preferences? It could be.

Elsie Comes From A Line Of Showbiz

If we look into the Deschanel-Pechenik family, almost everyone is in the entertainment industry.

Zooey Deschanel came into showbiz at the very early age of 17 years. Shortly after, she got her first film role in Mumford (1999). Since then, she has played in a number of movies like 500 Days of Summer, and Yes Man, and is famously known as the star of the FOX sitcom, New Girl.

Similarly, Elsie’s father, Jacob Pechenik, is an American film producer. He is best known for the movies Solace, The Skeleton Twins, and The Immigrant. Zooey and Pechenik also share a business. Their company Lettuce Grow teaches its clients to grow 20% of their own vegetables.

Not only her parents, but Elsie’s grandparents are also in this business of stardom. Zooey Deschanel’s father, Caleb Deschanel is a renowned cinematographer and director. On the other hand, her mother, Mary Jo Deschanel is an actress with remarkable performances in movies like The Right Shyft and The Patriot.

It will take years before Elsie starts working, but we can only guess that it will be in this line. We have to be patient.

Does Elsie Have A Fabulously Rich Life?

Of course, she does! She is just a 7-year-old and is already living a life that we can only dream of. Her mother, who is one of the most successful actresses in America, has a net worth of $25 million.

Even her film-producing father is rich with a net worth of $3 million. The combined money from her parents allows Elsie Otter Pechenik to have a fulfilling and satisfying life.