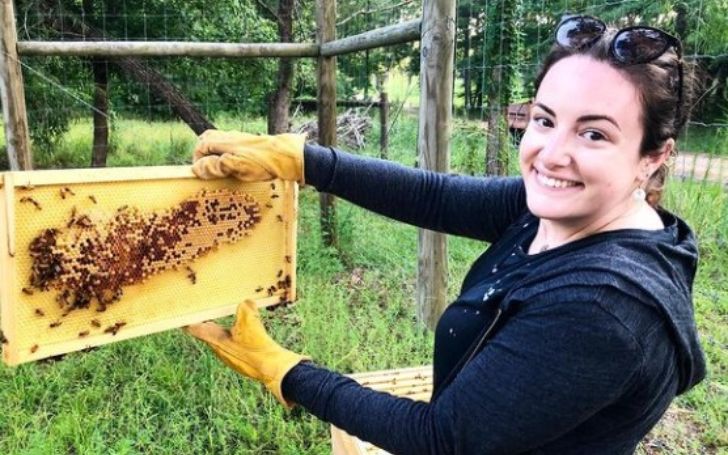 Unlike her performer father, she is known for her humanitarian work and has been involved in various non-profit organizations. So, what has she done as a social activist? Is she still actively working on it?

Today, in this article we will explore every unknown fact about Jeff’s eldest daughter, Jordan Foxworthy including her early life, her social activities, net worth, and many more.

How Old Is Jordan Foxworthy? Her Nationality And Ethnicity

Jordan Foxworthy was born in Oct 1992 as the first daughter of Jeff Foxworthy and Pamela Gregg. Though the actual birthdate is unknown, she is 30 years old as of 2022. She has a sister named Juliane Foxworthy born in 1994.

Jordan was born and brought up in Atlanta, Georgia and as per her Facebook profile, she is residing over there. She holds American nationality and as far as her ethnicity is concerned, Jordan is mixed. From her father’s side, Jordan is mostly English with small amounts of Scottish, German, Irish, and French.

Jeff’s this daughter apparently has quite a lot to boast about when it comes to academics. Jordan graduated from the Georgia Institute of EMS in 2015. From 2018 to 2019 she studied Social Justice at Kilns college. Moreover, she has done MA in Theology at Fuller Theological Seminary in 2017.

Likewise, she also studied at the Seattle School of Theology and Psychology. Since 2022, she has been studying  Film and TV Development at UCLA Extension, according to her Facebook page.

Jordan Was Interested In Social Work At An Early Age

Jordan is a social activist who showed her interest in social work at an early age. In order to work in an AIDS orphanage, she was taken to Kenya when she was a teenager. This incident was a milestone in her life. There she even sold cupcakes to help children in Africa buy mosquito nets to protect them against malaria.

Ever since then she has been actively working in different charity and non-profit organizations such as Compassion International, and Atlanta Mission.

In 2014, Jordan also became a supporter of the non-profit organization Charity: Water which helps to bring clean and safe drinking water to people in developing countries. Moreover, in 2015, on her 24th birthday, Jordan launched a campaign  (Jordan’s 24th Birthday Campaign!). Through that campaign, she raised $2864 which was later utilized to fund three water projects.

Along with her social work, Jordan has also been part of many organizations. She was a former Associate producer at Imba Means Sing which is a documentary feature film about the African Children’s choir.  She was also an intern at Apatow productions, Gary Sanchez Productions, and Funny or die.

Likewise, from 2016 to 2019, Jordan worked as a community living assistant, Campus administrator, and ambassador at Atlanta Mission. Currently, she has been working as a road rep at Compassion International.

Jordan’s parents Jeff Foxworthy and Pamela Gregg met at Atlanta’s Punchline Comedy club in 1984. After dating for one year they finally exchanged vows on September 18, 1985, in a small ceremony with their friends and family. The duo has been happily married for over three decades.

The love story of Jordan’s parents is a real-life fairytale. Their connection as a couple is so strong that they have been able to set the example of couple’s goal. Jeff highly admires his wife Pamela. He even considers her the main source of inspiration for his successful career.

Jordan’s younger sister Jules (Juliane) was born on March 13, 1994. The two daughters of Jeff have quite a good relationship. Talking about Jules’ education, she earned a bachelor’s degree from Auburn University.

She married Brendan Corley on May 19, 2018, in a grand ceremony. Three years after their marriage Jules and Brendan were blessed with a little boy, Ronan Foxworthy Corley on March 8, 2021. Besides her happy married life, Jules is into cooking and blogging and often shares her recipe blogs on her website.

How is the relationship between Jordan Foxworthy and her Father?

Jordan’s father Jeff, was always there whenever his daughters needed him. He is a proper family man and never disappointed his wife and daughters. He talks about his daughters proudly whenever he is asked about them. His bond with his girls is so intense that he never misses a chance to mention them.

While talking with Atlanta’s Parent, he said,

“One-hundred years from now, nobody will care what kind of job you had, what awards you’ve won, none of that matters. But they will care about what kind of kids you left behind.”

According to him, his wife is the glue that keeps everything together. Jeff always wanted to set an example to his daughters about what sort of quality they should expect from a guy.

For Jeff, his daughters are a blessing in his life which he has even mentioned on his Instagram account. He considers his daughter as the source of joy and purpose in life.

Going through her Instagram and other social media accounts, she seems to be pretty much close to her family members and her friends. But about her relationship, she has not revealed anything yet.

Therefore, it is quite difficult to trace her love life. Through our research, we can assume that she might be single.

Though Jeff’s daughter, Jordan’s actual net worth is far from the media, the lifestyle she shows on her Instagram implies that she is at least sound in terms of finances. Whatever the case, amassing financial breakthroughs doesn’t seem to be her primary motive as she apparently is more involved in giving back to the community.

While she now may be a volunteer in non-profit organizations, it is pretty undeniable that she has had a somewhat lavish childhood considering her father Jeff surpassed millionaire status a long time ago. Jordan’s comedian dad now has an estimated net worth of over $100 million.