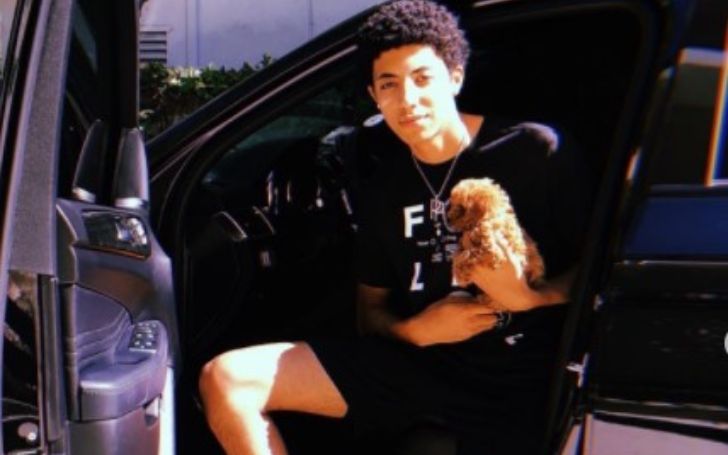 Preston Pippen is the son of a retired American professional basketball player Scottie Pippen and his ex-wife, Larsa Pippen. 20 years old, Preston is a celebrity kid who belongs to the athletic family.

Preston’s father Scottie is six times NBA champion and an Olympic gold medalist. He has given his 17 years in sports. Considering the legacy, it is natural for some to wonder if his son, Preston also has an interest in the game. And if yes, what team does the star kid play for?

There are also occasional queries regarding his life on its own, how was his childhood and all. Furthermore, Preston’s personal matter (his girlfriend/romantic affiliations) might also be a subject worth decoding. Let’s explore all the hidden facets in the article below.

When is Preston Pippen’ Birthday? His Nationality and Ethnicity

Preston Pippen who was born in the year, 2002, celebrates his birthday on August 26th. Born to the star sign of Virgo, Preston is 20 years old as of 2022.

While Preston is an American by nationality, his ethnicity is yet to be known. Nonetheless, since he is the son of Scottie, it is presumed Preston, at least, has some African-American ancestry. On the other hand, from his mother’s side, the 2002-born is of middle eastern descent as Larsa is the daughter of a Syrian father and Lebanese mother.

Both his brothers including him have interests in basketball while Sofia, the youngest sister of Preston, has an interest in modeling. She was a participant in Dancing with the Stars: Juniors in its first season.

He played college basketball for the Vanderbilt Commodores as well. He has been going great in his professional life.

Apart from Preston’s biological siblings, he has four other half-siblings from his father’s side: Antron, Taylor, Tyler, and Sierra.

Antron was the eldest half-sibling of Preston, born on December 29, 1987. He was born during Scottie’s first marriage with Karen McCollum. Though the ex-couple were married only for two years from 1988 to 1990, Scottie had a great bond with his eldest son. Unfortunately, Antron passed away on April 18, 2021, at the age of 33.

Moreover, Preston’s dad Scottie was in a relationship with 28-year-old model Sonya Roby and they had twin daughters, Taylor and Tyler born on July 20, 1994. However, Scottie initially refused the paternity. But later, a DNA test report proved that he was the biological father of the twin girls.

Tragically on the ninth day after the birth, Tyler died. The other daughter, Taylor, apparently is a volleyball player but reportedly, she never had her father by her side while growing up. Though she knows the weight of her last name, she wants to build her own identity.

Likewise, from his ex-fiance, Yvette DeLeon, Scottie has a daughter named Sierra (born on February 17, 1995). Even in this case, Scottie, at first denied accepting her as his daughter which later dragged him to court for proof, once again.

Preston’s Parents, Scottie and Larsa got separated after 20 years of marriage

Preston’s parents Scottie and Larsa got married in 1997, two years after they started dating. Larsa (previously Larsa Younan) was Scottie’s second wife. She is a fashionista and well-known TV personality who worked as a cast member on the first season of The Real Housewives of Miami. Larsa and Pippen were married for two decades during which they became parents to four children together.

Preston’s mother, Larsa, and the ex-NBA star first decided to split in 2016. But later they dropped the idea as they wanted to work on their relationship. However, the reconciliation didn’t work out and the parents of four divorced in 2018 once and for all.

Preston’s dad Scottie Maurice Pippen was born on September 25, 1965. He is a former basketball champion who has played for 17 seasons in National Basketball Association (NBA). Being one of the 50 greatest players in NBA history, Scottie contributed his 17 years in this field. With the Chicago bulls, he won six NBA championships.

Through his defensive abilities, he became the only NBA player to win an NBA title and Olympic gold medal in the same year two times. He is the greatest basketball defender of all time winning multiple titles and awards.

Preston has multiple social media accounts including Instagram, Twitter, Tiktok, and more. However, he only has a handful of posts in almost all of them. Consequently, not much about his career is obvious.

Nonetheless, his social media, especially his Instagram content do show that like his father, Preston is also passionate about basketball. In fact, he apparently is one of the players on his high school basketball team.

Also, according to his Ig posts, Preston seems very close to his parents and his siblings. He also often shares photos with his family members on his Instagram. In addition, the young man has a good bond with Shareef and Shaqir, sons of Shaquille O’Neal, and Bronny, son of LeBron James.

Does Preston Pippen have a girlfriend?

As of 2022, the celebrity kid Preston seems to be single. This looks especially true according to his activities on Instagram and other likewise spaces. The son of Scottie and Larsa does love posting images of his family and friends but so far, he hasn’t revealed even the tiniest glimpse of his romantic aspect.

Like most celebrities, Preston chooses to keep his personal life secret. Hence not much is known about his dating life let alone who his girlfriend is. Due to the secrecy, it is also equally possible that Scottie’s this son is very much single and is just busy being a boy of his age.

Scottie And His Ex-Larsa Are Both Rich; What About Their Son, Preston’s Net Worth

It is quite clear that Preston’s parents, Scottie and Larsa are both rich on their own. The former Chicago Bulls reportedly sits atop a net worth of over $ 20 million while his ex-spouse, Larsa has an estimated wealth equivalent to $10 million.

However, considering Preston’s young age and his not-so-open life, it may be too early to start pondering over his net worth. But worth noticing is the fact that Preston, on his Instagram, is often seen posing by fancy and luxurious cars and in the backdrop of all sorts of extravagant places.