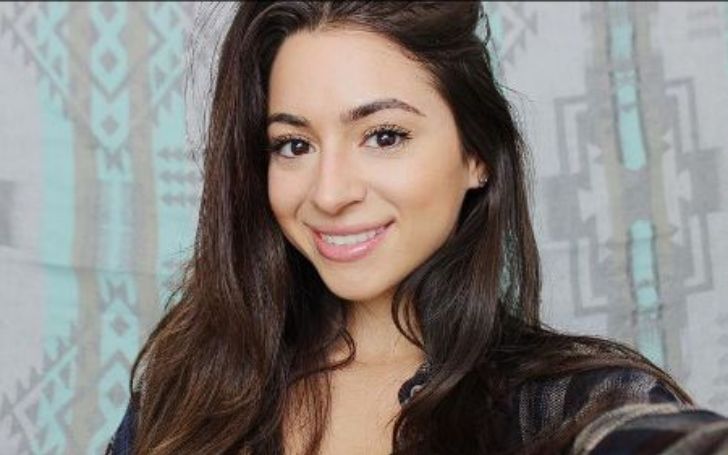 Talia Scott is a famous social media personality, singer, TikTok star, and YouTuber. She has made a name for herself through her singing capability and has made a lot of covers along with Despacito which has gathered a lot of traction.

Likewise, Talia is also known for being the better half of Roger Scott. Many of you might be curious to know how the couple crossed paths, when did they marry, do they share any kids, a lot of questions seem to be surrounding the couple.

What’s more, Talia’s fans are also curious to know about her family background including her early life siblings, parents, and more. Hence without wasting any of your time, let’s look right into the life of the social media star Talia Scott.

Talia Scott was born Talia Martinez on April 14, 1991, in Las Vegas Nevada, USA. She is the daughter of Cecilia Martinez (mother), but the details regarding her father are still out of the picture. Similarly, talking about her age, the social media sensation is 31 years old as of 2023 and her zodiac sign is Aries.

Furthermore, on the subject of her ethnicity, she has a mixed racial background of Nicaraguan and Mexican. And her nationality is American.

Talia has a younger sister named Danisa Martinez. Her sister seems to be a makeup artist as she posts many images on her Instagram displaying her work and talking about different makeup products. Apart from this, while going through her Insta posts we can also see her with other girls who she mentions to be her sister. But whether or not they are Talia and Danisa’s sister is still a mystery.

The famous YouTuber is a well-rounded person. Scott has graduated from the prestigious Graceland University, however, the information regarding her field of study hasn’t been revealed yet.

Talia Scott Career Details: She Is A Social Media Influencer

Talia Scott started her career by creating her YouTube channel back in 2012. She has posted over 60 videos so far and has gathered a total of 165K subscribers and over 21 million views.

However, the social media star rose to fame after her cover of the hit song Despacito went viral. It has accumulated over 6 million views in a span of 5 years. She has also released her own songs named Feel That and Mama which are also available on her YouTube channel.

Similarly, the YouTuber started her Instagram account back in 2014 and a couple of years later has over 1.8 million followers. She mainly posts dancing videos alongside her husband and friends.

Talia’s boyfriend-turned-hubby decided to propose to his soon-to-be wife on a beach with a beautiful diamond ring. The duo had been dating since 2016. Likewise, the pair took their relationship even further and was engulfed in a new journey. As Talia Martinez became Talia Scott when she decided to walk down the aisle with the love of her life Roger Scott. The duo got hitched on May 19, 2021, in front of their close friends and family members. They have been together ever since and have been enjoying a blissful married life.

Moreover, their wedding video has been uploaded to Talia’s YouTube channel with the title “OUR WEDDING | MEET THE SCOTTS.” She has also written a description for the video thanking all of the people who made it possible and said,

“May 10, 2019❤️ Best day of our lives!! HUGE thanks to all of the amazing people that made this day possible for us✨ we love you all!”

From the video, we can see how happy the couple was during the wedding and we also hope that they keep on sharing the same love for each other until death does them part.

The Couple Met In A Club

Talia Scott met her love at a club in 2016. Back then she used to live with one of her cousins. The way she found her future husband is nothing less than a fairytale. She has explained how she met Roger in a video titled “You Can Find Love In The Club.”

According to the video, her cousin wanted to go to a club but Talia wasn’t interested. But after a while, she agreed and even called some of her friends to join in the fun. However, her cousin even though was ready to go she changed her mind and stayed at home. Because the TikTok star had already called her friends she decided to go to the club all by herself.

It was where she met Roger. She found him to be cute and decided to chat with him. During their conversation, her now-husband asked what kind of boys she liked. She replied with an I don’t know yet and asked the same question and Roger started to explain.

The two lovebirds felt an instant connection and soon started dating one another. Their relationship blossomed and the rest is history.

A Little About Talia’s Husband: Roger Scott Is Also A Social Media Star

Just like his wife, Roger Scott is also a social media influencer. He is a YouTuber and a TikTok star who posts funny videos alongside his wife. His YouTube channel The Scott Family has over 830K subscribers and well over 730 million views.

She is active on Instagram under the name (@_taliascott) where she has 1.8 million followers and 966 posts. Similarly, she is also active on TikTok (@taliascott) with 85.5K followers.

Moreover, she is active on another Youtube channel alongside her husband The Scott Family, and on TikTok (@_thescottfamily) with 4.9 million followers and a whopping 156.8 million likes.

As mentioned, Talia Scott is famous on social media and has millions of followers on TikTok and well over 100K subscribers on her YouTube channel. She has earned a decent amount of wealth from her videos and brand deals.

She is estimated to have a total net worth of around $1.5 million.

Besides Tiktok, Talia is a fitness and health expert. She is very much concerned about her skin and maintaining a beautiful body, appearance, shining hairstyle, and slim figure. Scott is also one of the most loved faces on social media. The reason behind her beautiful body structure is doing yoga and exercising.

Similarly, talking about her height Talia stands at around 5 feet 5 inches tall and has black eyes complimented by her brown hair.